My Australian Pet Peeve is Beautiful

According to the experts, when one moves abroad they go through four phases of adaptation to the culture:
1. Elation- or the honeymoon phase when “Everything here is so different and exciting!”
2. Resistance- when expats compare the new environment to what they are accustomed to at home: “XYZ is better back home than here.”
3.  Transformation- about nine months after moving abroad, expats begin to see the positive side of “all those differences”, and
4.  Integration- when the new location becomes “home”.

Having lived overseas a bit, my transition to life in Australia has been pretty easy.  I am experiencing resistance to only one aspect of Australian life: ADJECTIVES.  You heard me right… ADJECTIVES.  Actually, just one adjective in particular.

The first week I arrived in OZ, The Great Australian Spelling Bee was one of the top programs on television.  I kid you not.  Being a nerd, I mean, a professor, I thought it my duty to diligently tune in to channel 10 each evening.  I quickly learned we don’t fly in airplanes in OZ, we fly in aeroplanes.  And it’s not Aitch-R (HR), it’s HAITCH-R. (If you don’t know what I’m talking about, go ahead and say your nice, American “H”.  Now, make the “hhhhhhhh” sound and immediately tack the letter “H” onto the end. If you still can’t figure it out, watch this, and try not to feel too inadequate.)  On principle, I still fly in airplanes and file my employment paperwork at Aitch-R.

If you have ever participated in a Spelling Bee- I did, in the 7th grade, and no, I did not win- you know that a contestant may ask for a definition, or that the word be used in a sentence.  Enter the dictionary.  Australia does not use Webster’s, as is most common in the U.S.  The official Australian dictionary is the Macquarie Dictionary.  I recently became well acquainted with the Macquarie Dictionary when I felt the need to look up a word which is grossly overused Down Under: beautiful.

My first day on campus a colleague introduced me to her graduate student, who took me on a little tour.  When he returned me to his professor’s office, she asked me, “Did you like Student X?  Isn’t he just beautiful?”  A puzzled look on my face, I replied, “Uhhhhhhhhhhh… what?”  I thought perhaps this professor was either crazy, or maybe she was just an overly emotional type.  She responded, “He’s such a great person.  He’s really beautiful.”  I did not respond.

Not long after meeting the beautiful graduate student I was in the lunchroom at work and was offered a strawberry from a colleague.  “Here Kelly, have some strawberries.  I grew them myself.  They are beautiful.”  They did look quite nice, and they tasted good.  Of course, I still couldn’t figure out whether designating the strawberry as beautiful was intended to refer to the outward appearance, or the deliciousness.

I’m convinced that over the last six months I’ve heard the word beautiful used more times than in the previous 35 years.  Meet a new neighbour?  The neighbour is beautiful.  The park down the road?  Beautiful.  How was the night you spent in jail?  That’s right!  Beautiful.

But the tipping point in my newfound hatred of this word came recently when my roommate returned from the pool.
Kelly: “Hey roomie.  How was the pool?”
Roomie: “Ah!  It was beautiful!”
Kelly: “Well, was the water cold?  Or was it comfortable?  Were a lot of people there?  What about the chlorine?  I don’t like swimming in pools that are over chlorinated, so, how was it?”
Roomie: “It was beautiful!”
Kelly: “WHAT THE HELL DOES THAT MEAN?!?!?!”
Ok, I didn’t really say that, but I sure wanted to.

Apparently, there are no other adjectives in Australian English which convey a positive sentiment.  It’s either beautiful, or bust.  The problem is that the word is so overused here that it is completely ruined for me.  I was telling a friend recently that if a man ever told me I was beautiful I would be forced to dump him immediately because quite frankly, I wouldn’t believe him.  “I’m beautiful?  Well, the other day you called the garbage can beautiful.  So, by default you basically just called me garbage.  Is that what you are saying?”

After hearing about the beautiful pool I was forced to spend some time with Macquarie’s to see if beautiful has a different meaning here.  And lo and behold, it does.  Not only does it describe visual appeal, it can also be used to mean anything pleasant.  In fact Macquarie’s used the example: a beautiful meal.

But, I don’t care if it is in the dictionary.  I will resist using beautiful until my last dying breath.  And I never thought I would say this, but, please don’t ever call me beautiful. 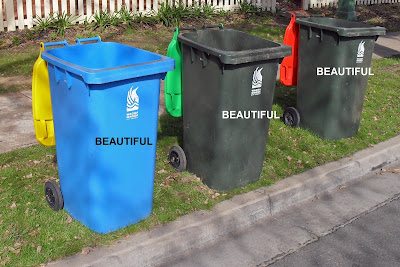 When you are born and raised in the northern hemisphere, and then move to the southern hemisphere as an adult, it’s hard to grasp the holiday spirit.  Even when I lived in Orlando, and wore shorts on Christmas Day while working at Walt Disney World, it still felt like Christmas.  Then again, it was Disney, so we had fake snow and Christmas carols playing everywhere.

Back May, before making my permanent move out here to Australia, I came out for a one week “get to know you” visit.  It was a good thing that trip went well, seeing as I had already signed a contract and quit my job.  During that trip I went to dinner at my soon-to-be-new boss’s house with his family.  His nine-year-old twins and I got along quite well, comparing recess games, favourite foods, and holiday traditions.  They have never seen snow except for in the movies, so the idea of a white Christmas was a quite appealing to them.

Last night I happened to notice that A Charlie Brown Thanksgiving was scheduled to air on television in the States.  I must confess that this was the first time I actually thought about Thanksgiving, partially because we don’t see Thanksgiving commercials or the corresponding accoutrement in the stores.  But probably also due to the fact that as I sit here writing this blog post at 6am, it is already well above 90 degrees, hence the idea of cooking a turkey and eating pumpkin pie in traditional Thanksgiving (i.e. Church of America) fashion lacks appeal.

But I do have SOME thing- many things, actually- but ONE thing in particular to be thankful for. My Thanksgiving is being celebrated in style, in my new house, surrounded by my belongings…. wait for it…. that arrived… from the States!  That’s right folks, hell hath frozen over and my ship has come in!

Last week around 2pm my apartment looked like this: 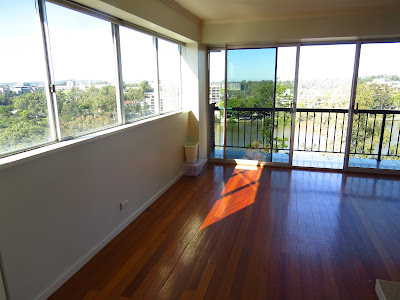 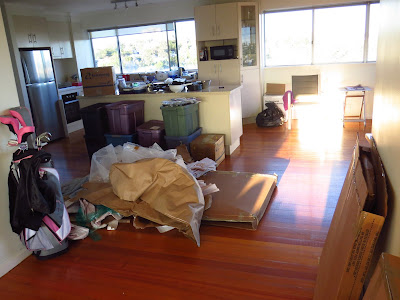 But, here’s the best part of the story.  Back in February when I accepted this job I started watching everything I could on youtube about Australia.  I ran across this television series called Border Security: Australia’s Front Line.  And, let me tell you, the front line takes their jobs seriously.  But in all honesty, I can understand their tenacity.  Australia is very isolated and has an incredibly delicate environment.  By being vigilant about what comes into the country, they have avoided many of the diseases which have proven deleterious in other parts of the world.

For instance, if you typically fly with snacks, make sure you eat your beef jerky before you arrive otherwise it will be confiscated due to fear of foot and mouth disease.  I know, I know, it’s a processed food and can’t possibly spread that disease, but as I said the Australians are cautious, to the point of being almost paranoid.  If you plan to come here for diving, leave your wetsuit at home.  They don’t want to risk you bringing in any parasites that might be harmful to the wildlife here.  When I climbed Kilimanjaro two years ago, my Australian “buddies” gave their hiking boots to our guides and porters because they said they would be confiscated due to the concern there might be a trace of dirt on them once they got home.  They said they might as well give them to someone who could use them rather than having them confiscated and destroyed.

Well, having watched Border Security, read lots and talked to friends about what I could “get away with”, I was worried that my bike, golf clubs and wooden giraffe from Africa might meet their demise in Australian Customs.  But it turns out flattery will get you everywhere.  I wrote the Customs officials little love notes and put them all over my belongings.  And they even wrote me back.  Here is the note I put on my golf clubs.  And as you can see, they responded by welcoming me to Australia: 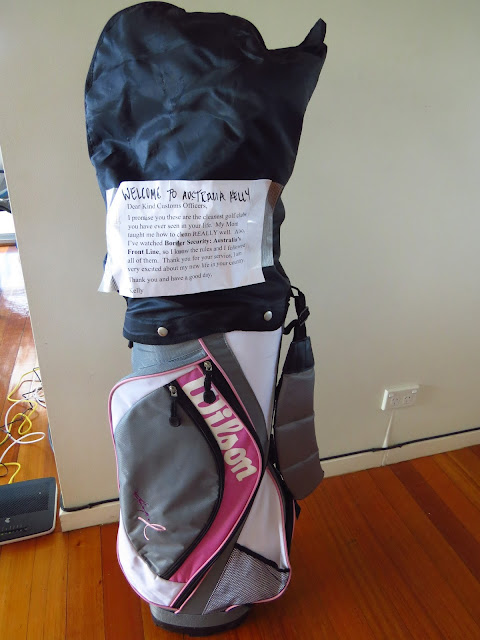 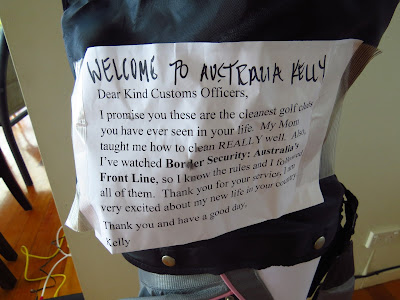 As I’ve said before, I LOVE coming back into the U.S. after being gone for a long time because the Customs officials always say, “Welcome home!” after stamping my passport.  But, after my recent experience successfully receiving my things, I think the Australian Customs Department may be my new bestie- at least on this side of the (other) pond.
Posted by Unknown at 7:49 AM 3 comments: